What You Might Catch on the Fishing on Island Time

Whats the Catch? The types of Fish vary by type of Charter. Learn more about the great catches you can get.

Nothing speaks a good day of Drift Fishing like a knock-down, drag out with a Wahoo! The Wahoo’s body is elongated and covered with small, scarcely visible scales; the back is an iridescent blue, while the sides are silvery, with a pattern of vertical blue bars. These colors fade rapidly at death. The mouth is large, and both the upper and lower jaws have a somewhat sharper appearance than those of Kingfish or Spanish Mackerel. Wahoo can swim up to 80 mph and are one of the fastest fish in the sea. They mostly feed on smaller fish and squid.

Mutton Snapper are a beautifully colored whitish-gray or yellow toned with greenish or yellowish-orange spots in rows along the sides; dark horizontal band from snout through eye (young only); two conspicuous canine teeth at front of upper jaw; dorsal fins have dark or reddish borders; and a dark spot on side underneath dorsal fin. Mutton Snapper spawn June through August; feeds on crustaceans and small fish.

A Florida saltwater fishing guide will earn his keep during Kingfish season. Kingfish are iridescent bluish green on the back; sides silvery, streamlined body with tapered head; no black pigment on front of dorsal fin; lateral line starts high and drops sharply below the second dorsal fin; young fish often have yellow spots like those of the Spanish mackerel. Kingfish are a schooling fish that migrates from south Florida waters in winter to more northerly waters in spring; Gulf population thought to be separate from Atlantic population, with considerable mixing in winter from Cape Canaveral past Key West; spawns in midsummer OFFSHORE; feeds on small fish and squid.

Back and upper sides olive to bluish with yellow spots; lower sides and belly with alternating narrow, longitudinal pink and yellow stripes; prominent mid-lateral yellow stripe begins at mouth and runs to tail, broadening as it passes the dorsal fins tail fin is yellow and deeply forked. Found mainly in tropical waters; spawns in midsummer; rarely exceeds 30 inches and 5 pounds in size; feeds on small fish and invertebrates.

Fishing for Dolphin is a long, beautiful day spent deep in the blue waters off the Florida Coastline. Dolphin are also called Mahi-Mahi. These gorgeous fish are bright greenish blue above, yellow on sides, with capability of flashing purple, chartreuse, and a wide range of other colors. The single dark dorsal fin extends from just behind the head to the tail; anal fin margin concave and extending from anus to tail. Dolphin are one of the fastest-growing fish, thought to live no more than 5 years; swimming speed is estimated at 50 knots; spawns in warm ocean currents throughout much of the year; young found in sargassum weed; feeds on flying fish and squid.

A Florida Fishing Charter gem. Cobia are a long, slim fish with broad depressed head; lower jaw projects past upper jaw; dark lateral stripe extends through eye to tail; first dorsal fin comprised of 7 to 9 free spines; when young, has conspicuous alternating black and white horizontal stripes. Cobia spawn in spring and early summer; feeds on crabs, squid, and small fish. They can often be seen basking in the sun. Cobia are very inquisitive fish, they often come right up to the boat where you can toss just about anything to them and hook up.

Sailfish are a South Florida Drift Fishing staple and they are our State Saltwater Fish. They are beautiful to see and will give you a decent fight. Sailfish have dark blue coloring on top, brown-blue laterally, silvery white underbelly; upper jaw elongated in form of spear; first dorsal greatly enlarged in the form of a sail, with many black spots, body covered with embedded scales, blunt at end; lateral line curved above pectoral, then straight to base of tail. This is a rapid growing species, reaching 4 to 5 feet in a single year and swims at speeds up to 70 mph. Sailfish feed on the surface or at mid-depths on smaller pelagic fishes and squid.

Florida Tuna is a fishing trip to be remembered as they run fast and will put up a good fight. The Blackfin Tuna has a bluish-black back with gray to silver sides and a white belly. A broad, brown stripe is located along the upper portion of the eye. There is a prominent yellow to golden-colored lateral band present on the sides. Small iridescent areas located on the sides of the abdomen are silvery. This area is sometimes marked with vertical rows of pale dots along with slightly elongate spots between these rows. Blackfin Tuna spawning occurs June to September in Florida waters. Various fish, squid, shrimp, crabs, constitute the Blackfin Tuna diet.

Charter Boat Fishing trips on the Atlantic Coast of Florida can produce sporadic catches of Spanish Mackerel. Spanish Mackerel have a color of green on the back, shading to silver on sides, golden yellow irregular spots above and below lateral line; front of dorsal fin black; lateral line curves gently to base of tail. Spanish Mackerel are a schooling fish that migrates north in spring and returns to warmer waters of the south when ocean temps. Drop below 70 degrees. They feed on small fish and squid.

Grouper are traditionally a Florida deep sea fishing favorite. Most Grouper are brownish red; lining of mouth scarlet-orange; blotches on sides in unorganized pattern; second spine of dorsal fin longer than others; pectoral fins longer than pelvic fins; squared off tail; margin of soft dorsal black with white at mid-fin; black dots around the eyes. Grouper spawn in April and May; preferring water temperatures between 66 and 77 degrees F; feeds on squid, crustaceans, and fish.

This Snapper has a Vermillion Red body color, fading to pink on the lower sides, and the silver on the belly. They have fine diagonal to horizontal yellow stripes below the lateral line. It has a more streamlined body shape than most other Snappers. Vermillion Snappers spawn between late April and the end of September and they are a small, relatively slow-growing fish. They often swim in large schools suspended over large, rocky bottom protrusions called “lumps”. They feed on smaller fish and some crustaceans.

Back To The Top 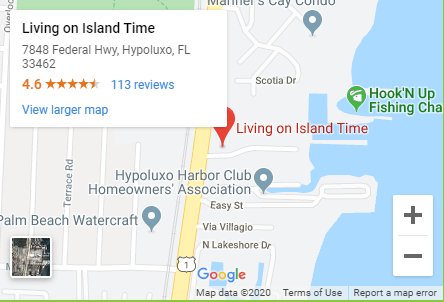